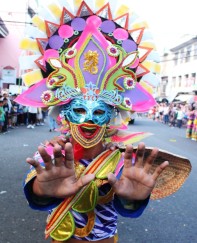 I had no expectations of Bacolod when we landed. I was just glad I had some of my favourite people with me on the trip. From the airport, we went straight to a restaurant called Imay’s for dinner with our host family. I wasn’t that hungry, but the food was glorious — from the scallops melting in my mouth to the crispy pata flirting in every crunch. From that dinner alone, I couldn’t stop myself from saying “grabe, lahat masarap”, over and over.
After dinner, we got to the apartment which, unfortunately, hadn’t been used for about six months. Hence, the murky water and unkempt toilet and bath. Not one of us was able to take a shower that night. Pao and I stayed up until 5 in the morning to work on some articles left undone from Manila. Ramon (bless him) went out at dawn and found a hotel for us to transfer in.
The following day, we transferred to East View hotel and took our first Bacolod shower there. I was still a little light headed from lack of sleep, but the shower helped perk me up. We then proceeded to see the MassKara street parade. 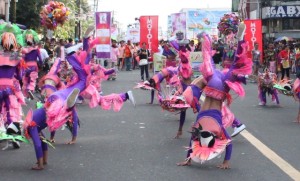 The parade was entertaining with all the dancing and colourful, smiling masks. Sadly, the people along the sides couldn’t join in and dance, unlike what I experienced in Kalibo’s Ati-Atihan in January where anyone and everyone can jump in the middle of the parade and join in the revelry. Then again, we can’t really join the dancing in this one since there was great choreography by the participating groups. We certainly don’t want to ruin that. Which is why my heart goes to the participants. I imagined they must have been practicing their moves for weeks, months even. Then there they are, dancing under the extreme heat of the sun. A couple of dancers collapsed in front of us – there’s probably more from the entire stretch of the parade. So even if we were really feeling the scorching heat, parched, sweaty, sticky and all, we really can’t complain, can we? What we were going through was nothing compared to what those street dancers had been experiencing since their practice days.

We went to Carbin Reef in Sagay, Negros Occidental the following day. It was a long stretch of sandbar within the Sagay marine sanctuary, open for public swimming only from 10AM to 3PM. There was only our group and another family when we got to the reef. The water was cool, not cold, which made it all the more enticing for sun-drenched tourists like us. The water was crystal clear and the sand, though not powdery soft, was clean. There are no facilities in the reef except for two bamboo shelters and two concrete ones, which I think were not for public use. Those who plan on going there must do all their toilet needs at the port  before proceeding to the reef.

Despite its lack of conveniences, Carbin Reef is definitely one for the bucket list.
That same night, we met a local councillor who turned out to be in charge of the reef. I was only paying half attention to him, but I believe I heard him say that there are sharks (!) and lots of crustaceans in that marine sanctuary. No wonder they don’t offer overnight stays and limit visiting hours. Still, I would love to go back there. Seriously. It was that breathtaking.
We spent the next day just going around malls. We went to the local perya that evening, where we successfully convinced our dear Ilongga friend/host/birthday girl to take one of the scariest rides there, the Sea Dragon (Pao and I conceded that the similar rides in Cubao and EK’s Anchors A-weigh looked lame compared with this one). Thea was such a good sport for riding with us, although she swears she almost “died” and that she would never do it again (love you truly, girl!).

We also went to The Ruins, which is the other reason why I wanted to visit Bacolod. It was as picturesque as I first saw it on Thea’s photo album on FB a year back. We took photos of the place and horsed around a little bit, trying not to get pissed with the group of maritime students who were shooting videos inside the edifice.

Someone told me that Bacolod is a good place to have a food trip in – and I only learned about it a few meals into it! I must say, I agree 100%. In fact, I came up with my own tagline for Bacolod along the way: walang hindi masarap sa Bacolod! Everything – whether it’s home-cooked or prepared from a local restaurant – was absolutely delectable! I always thought chicken is chicken wherever they are, but Bacolod proved to me that this place is indeed the home of chicken inasal. Even the cakes at Calea were sinfully delicious.

There were still a lot of places to visit (and come back to) in Bacolod, but the four days and five nights we spent there simply weren’t enough. The people of Bacolod are truly the most malambing (sweetest) people I’ve met. Their smiles are infectious, which is the reason why someone some time ago thought of baptizing this wonderful place as the “City of Smiles”. I will definitely come back to Bacolod – that is, after I’ve seen Cebu’s Sinulog, Iloilo’s Dinagyang, Marinduque’s Moriones, Quezon’s Pahiyas, Baguio’s Panagbenga….wow, the Philippines is truly a wonder paradise to be in!

For now, it’s Bacolod’s moment for me, and it would stay with me until my next adventure.

One thought on “Smile – you’re in Bacolod!”