I was fortunate enough to climb up the Busol Watershed and Forest Reservation in Benguet (between the boundaries of Baguio City and La Trinidad) recently. I am not an expert on trees, but I do my share in helping Mother Earth recover from her illness the best I can. In this piece, I am sharing what I saw, heard and discovered.

We went to Busol without any idea what to expect. We weren’t prepared, so I went there in my jeans, sweater and city boots. We took a van that took us as high up as its commercially designed body can take us. The dirt road was rough and narrow, with concrete debris scattered here and there. I suppose these debris came from the concrete houses scattered along the way. Apparently, these are houses of informal settlers (“squatters” as referred to by a DENR official we spoke with earlier) who came from out of nowhere to claim these spaces around Busol as theirs “by heritage”.

We went down by the security post and started our trek from there, not expecting anything that lies ahead. As it turned out, it would be a 3-km or so climb up to our target site. We stopped several times along the way — partly because our bodies couldn’t recover quickly enough from the surprise of the long and steep climb, and partly because we forgot to bring drinking water. And when I say steep, I mean “children’s playground slide” steep. 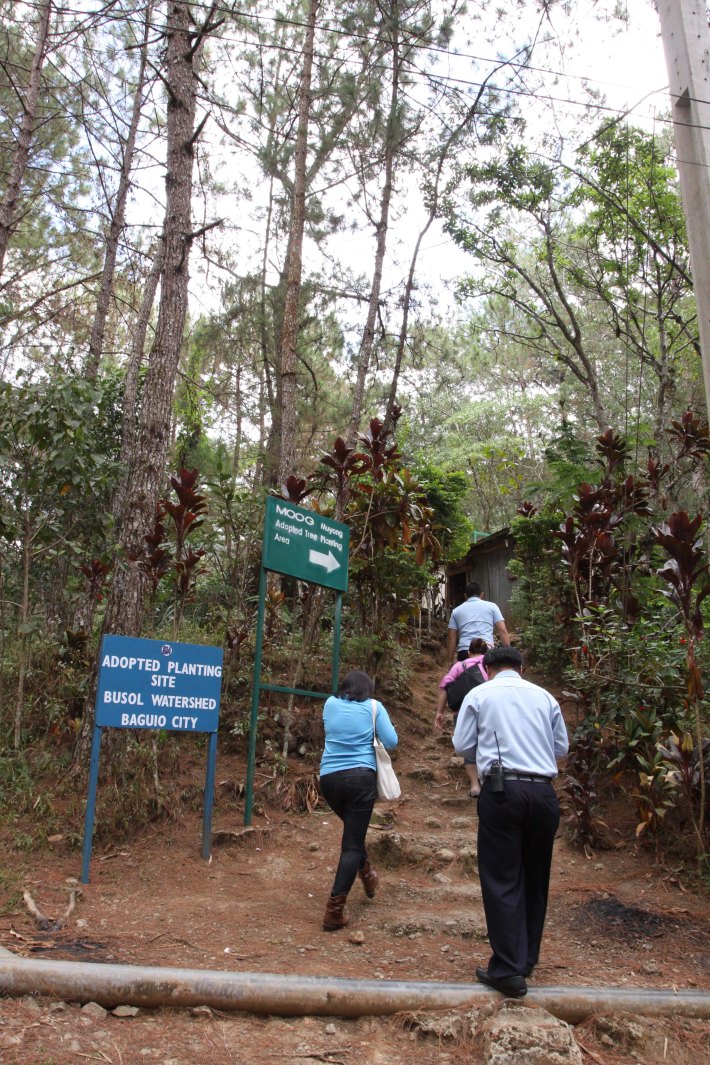 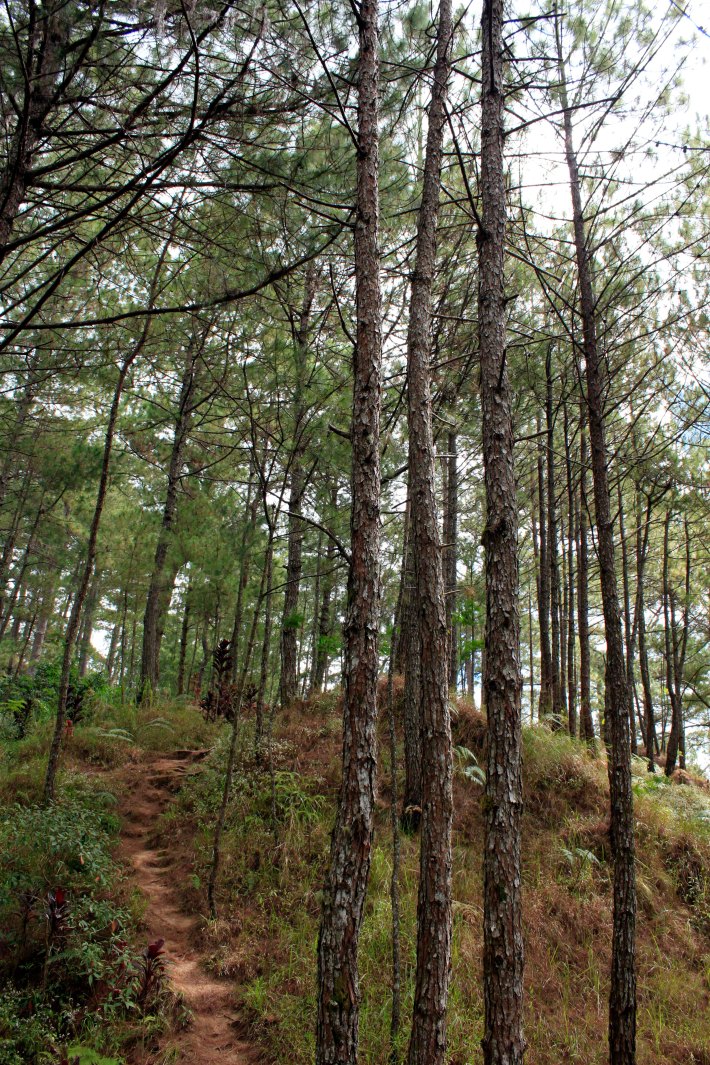 It didn’t help that the beaten path was covered with dry pine needles, making it slippery and even more difficult to tread. Ugh, if my leather boots could only speak!

Along the way, our guide Mark pointed to several trees that have burn scars by the base. Apparently, some informal dwellers wanted to burn the trees so they could have a vegetable farm instead. I remember passing by a patch of vegetable beds in front of some of the houses when we were in the van on the way up to the security post. 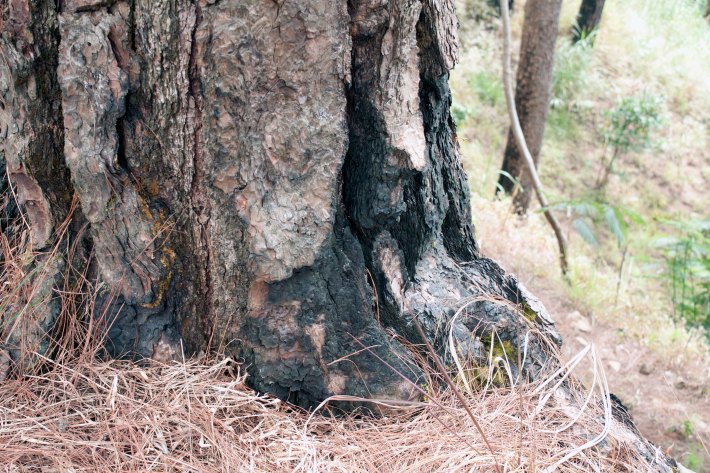 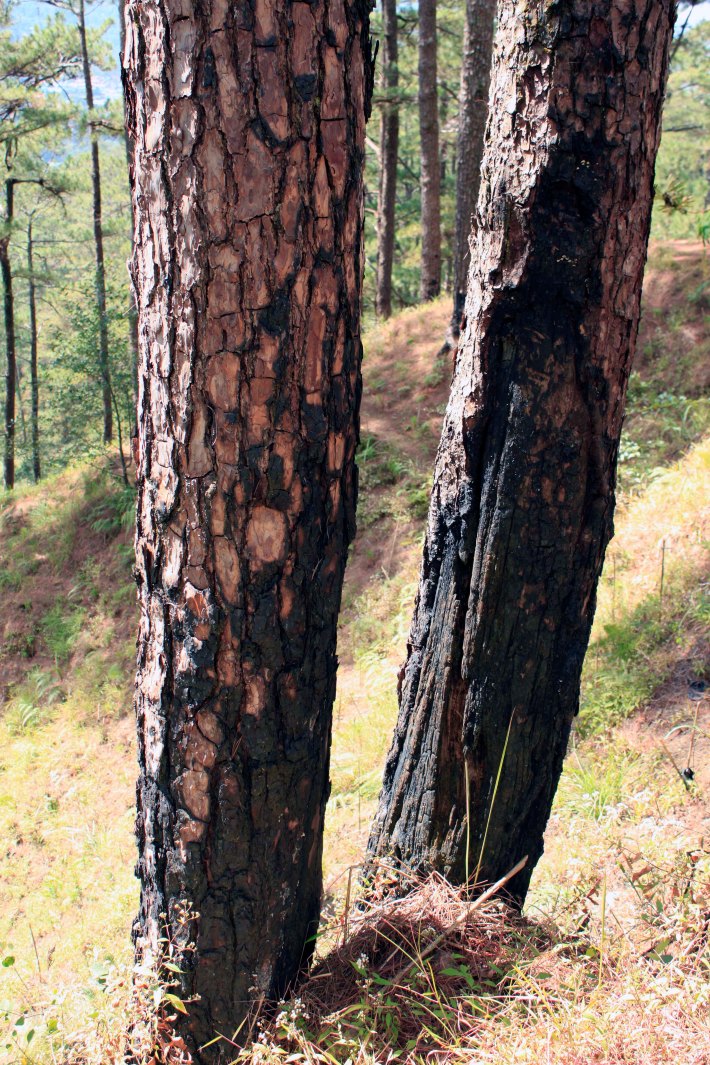 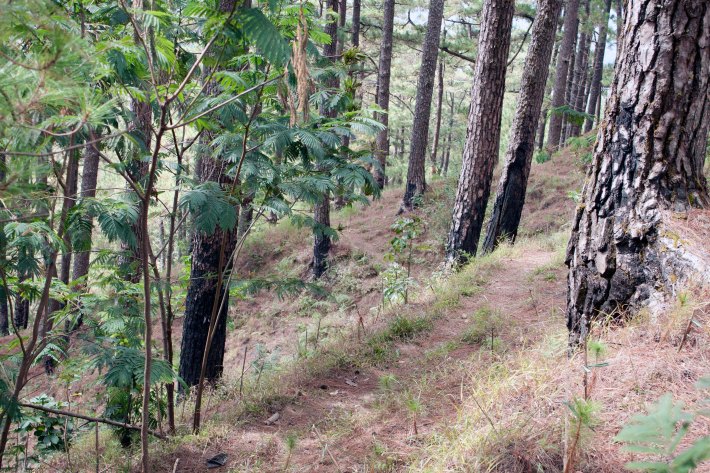 Once we reached the top, my fatigue immediately went away, blown away by the still but cool air of the mountain. Surrounded by tall pine trees, with blue skies and pristine white clouds above, I closed my eyes for a fleeting moment to take it all in.

Our guide Mark pointed to us the young pine trees (at least a foot tall) that they planted and are now sustaining by regular watering and weeding. More pine trees are scheduled to be planted, until they fulfill their 50,000 pine tree commitment. Thus far, they had already planted a little over 30,000, which they started planting January 2012. At the rate they’re going, they’re likely to complete the committed number of trees before the year ends. 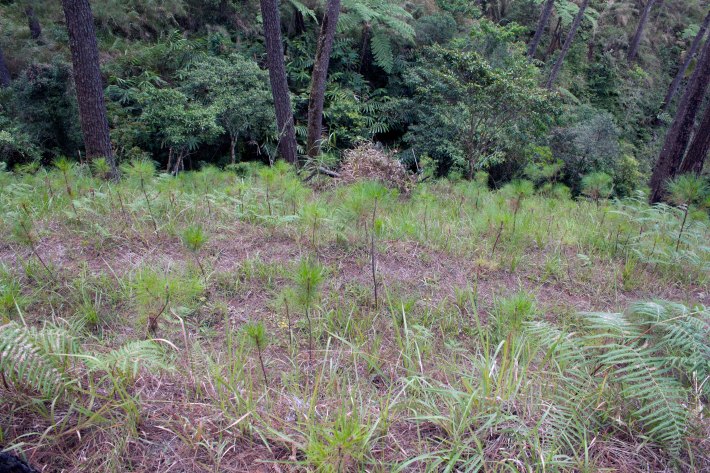 Admittedly, Mark said that their “Green Road to 50,000” project was part of a DENR compliance. Mark’s company, SM City Baguio, will redevelop its Luneta Hill property to address a topsoil erosion. In the process, some trees will be affected. According to DENR regulations, the company must plant 30 trees for every affected tree. Yes, this is about the 182 trees being protested by environmentalists in Baguio. 50,000 new trees for the 182 is more than enough, but of course, no environmentalist will accept that. Give the new 50,000 trees about five more years to grow so they can help the aging ones supply fresh, cool air to Benguet and see if these environmentalists care.

But this is not about SM Baguio pine trees vs the Baguio environmentalists. This is about what is being done in Busol. If you ask me, I would rather watch what happens to the 50,000 new pine trees planted by SM Baguio. What’s important here is the new trees have been planted and that SM is actually maintaining them. This is beyond merely complying to a government regulation. This is not just a PR move. I challenge everyone, especially the environmentalists, to go up to Busol and see which among those who planted trees are actually maintaining what they planted. Paramihan na lang ng punong itinanim at napalaki.

One thought on “Resurrecting Busol”